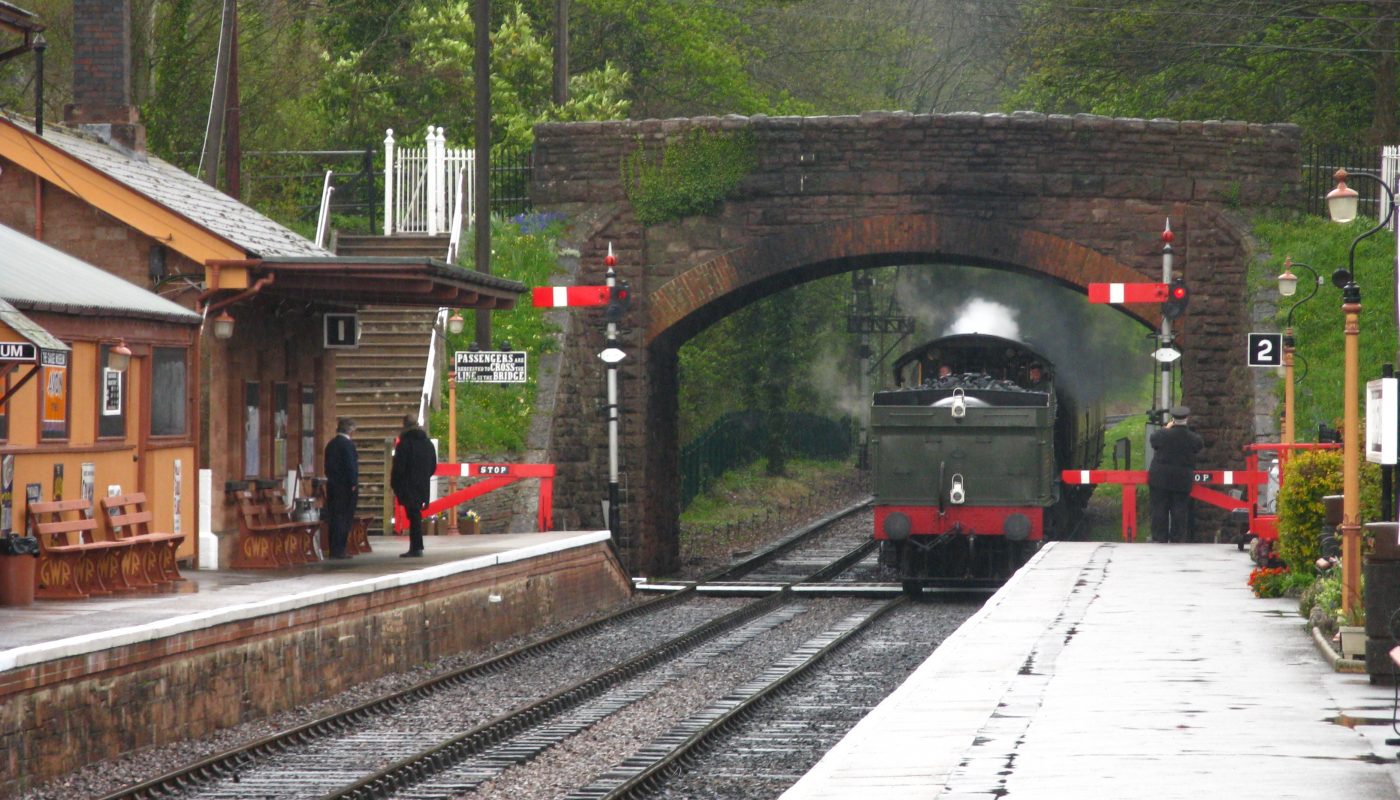 In which: I start with a damaged knee ● I progress by means of four trains and a bus ● the weather is bad, but improves ● I reach the start of the South West Coast Path ● I find a pub with a comfy sofa

My second Easter holiday walking a bit of the South West Coast Path began like the last, with a journey to Edmonton Green railway station, and from there to Paddington. Last year I commented that my right knee was twinging “which was not a good omen for a walking holiday”. It was this year too, but this year I knew it to be potentially worse as I’d suffered an injury in the Reading half-marathon a couple of weeks earlier, and while it was much improved, that was partly as a result of extensive use of Ibuleve and other medication. Still, I was moderately confident that it would hold up for the weekend’s walk.

At Paddington I repeated last year’s visit to the first class lounge. They proudly reported that phase one of the refurbishment was finished – I saw little difference other than that the comfortable chairs had been replaced with some much less comfortable, presumably to discourage lingering. I eked out the value from my first class ticket with a banana, a drink, and a visit to the loo.

The 1306 whisked me to Taunton in a little under two hours, where I briefly joined about 40 other people crammed into a bus waiting room which was big enough for about ten, then decided to wait outside in the rain instead. It was as well I did, for not all of us got on the bus, which was initially very crowded and totally inadequate to the job of carrying tourists with their holiday luggage.

Although the bus was going to Minehead, my destination, I was going to make the holiday more pleasant than a tedious bus ride, and I got off at Bishops Lydeard for the West Somerset Railway. This is one of the longest heritage railways in the country, but was very quiet when I arrived through the rain. I trundled my suitcase along the platform to the ticket office at the other end. Although it was about 1530 and the last train didn’t depart until 1615, I was asked if I minded paying by card as they’d already cashed up – apparently they didn’t anticipate any more customers on this damp day. That wasn’t a problem for me, and with my ticket in my pocket I waited outside under the canopy for the train to arrive from Minehead, then popped into the shop where I bought a “Past and Present” book with photographs of the line showing its decline under BR and renewal in the heritage era.

I then found myself a compartment to myself, and once underway watched a damp Somerset go by, the very modestly sized Quantock Hills with their heads in the clouds. Most of the cuttings and embankments were lined with primroses, and there were a few early bluebells. However, as we neared the coast the weather improved: the combination of the improving weather and the excitement of seeing the sea made the day seem more cheerful again, and as we turned away from the sea at Watchet for a little while the locomotive made wonderful noises as it worked hard to lift us from almost sea level to 50 metres in a short time, after which we coasted back down to the sea for the run in to Minehead.

A short walk along the sea-front brought me to the sculpture of two giant hands holding a giant map, that marks the official start of the South West Coast Path. It seems at first sight to be an odd spot to pick, just being part-way along the front, but the original route of the SWCP ran away from this point inland between cottages, whereas the modern route runs along the front from here, shown by words writ large on the pavement. 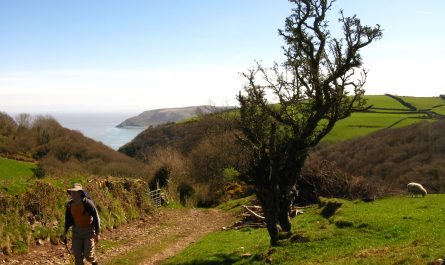 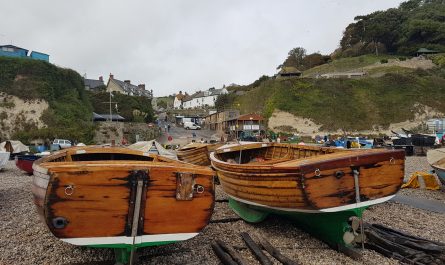