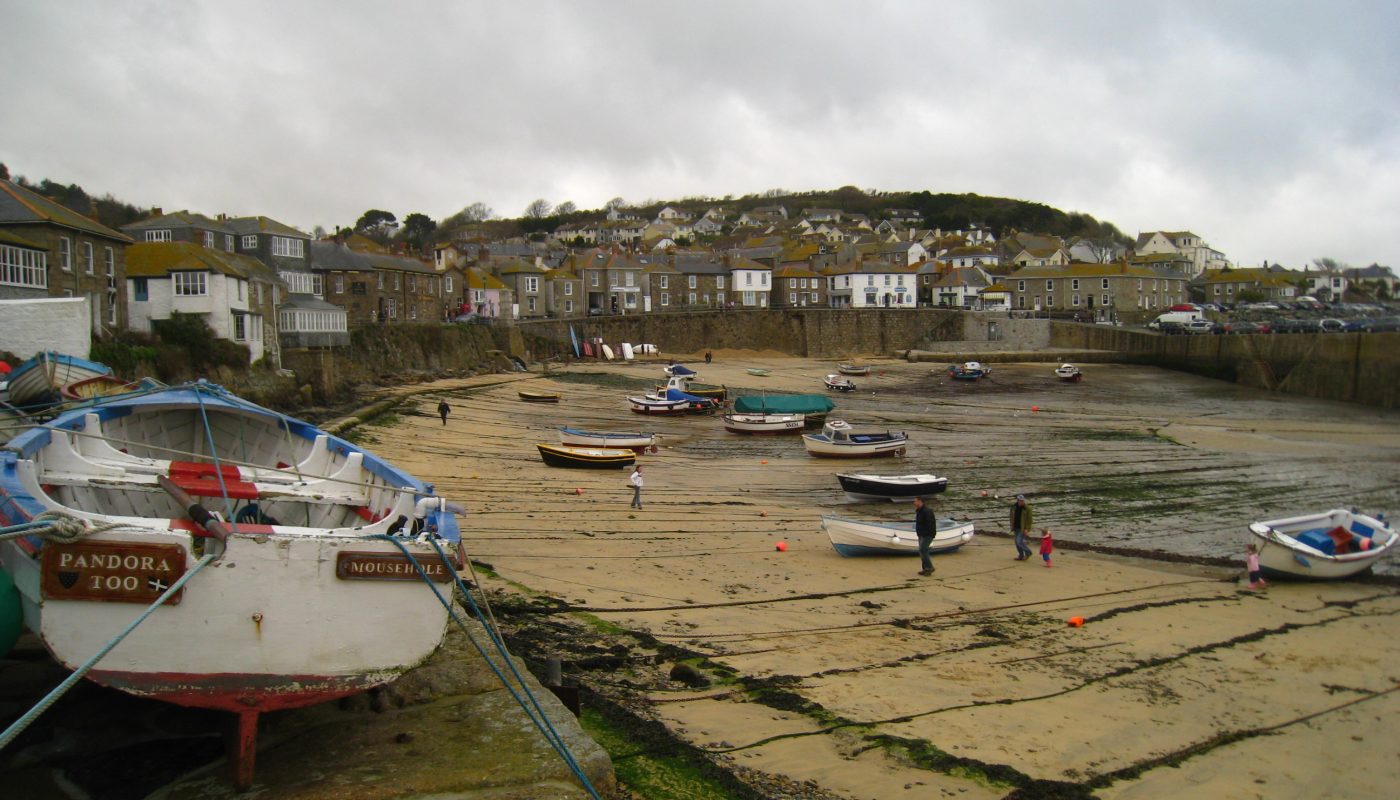 In which: I nearly visit Logan’s Rock ● there is more cliff-top walking and more coves ● I visit Mousehole ● the quality of scenery declines ● the walk reaches an end

The day began with power cuts at the hotel, which meant that I’d lost my Internet connection and thus the radio of the cricket from New Zealand, but more seriously meant that there was no water as the plumbing uses an electric pump. The power came on at 7.15, and I showered – the power went off again a bit later, then went on and off rather oddly, with even different lights within the breakfast room being affected differently. Presumably the area has multi-phase electricity, and some shops around the square had power and some didn’t.

I was taken back to Porthcurno by a local beef farmer, who then took my suitcase on to Penzance. The weather was light rain, which persisted for a couple of hours, then cleared to leave a mostly overcast day. The major change was that the wind had gone, leaving fairly calm seas. However, the rain, though light, was persistent and had made the rocks much more slippery than the showers of previous days.

One of the points of interest along this section was supposed to be the Logan Rock, a delicately balanced rocking 80-ton granite boulder made particularly famous when it was pushed off the cliff in 1824 by Lieutenant Hugh Goldsmith to prove a Dr Borlase wrong, the later claiming that it was impossible to move it from its present situation. The felling of the rock caused much local upset, and it was eventually hauled back up by 60 men, block and tackle.

The headland lies off the route but I decided to go and investigate. The route involved rather more descent than I had anticipated, and rather more rock clambering in ascending the headland, and eventually, not knowing what exactly I was looking for, and becoming gradually more worried about the rocky ascent when the rocks were wet, I abandoned the attempt and returned to the SWCP.

The walk to Mousehole had a degree of sameness about it. There was more cliff-top walking, a few coves, but nothing really stood out. Perhaps it was as well that this was the final day, or perhaps this really is a slightly less dramatic section, particularly after the delights of yesterday afternoon in the sunshine.

Or perhaps the delights were more subtle than the brutal granite architecture of the cliffs – there were lots of wild daffodils, small waterfalls, a little hut half way down a cliff, walking through trees, a walk across huge slippery pebbles on the beach at St Loy.

Tonight’s accommodation was a rather grander affair, with 5 AA diamonds, but it somehow gave the impression of being all style and no substance. That’s probably a little unfair, but while the person who welcomed me was pleasant enough, the whole place felt more like visiting a posh aunt. The ensuite facilities were adequate but cramped, and the shower had little water coming out of it. Perhaps I was just feeling a little low as the holiday was coming to an end.

I went out in the evening and had a long wander around before I found somewhere that offered me food that I fancied.

And so things moved towards their inevitable conclusion. Breakfast next morning was fine but not brilliant. I lurked in my room for a while, then wheeled my suitcase around the harbour to the railway station. I was there more half an hour early but the train was already there and so I went and found my seat and my free newspaper. The carriages were very hot since the sun was streaming through the windows on a gloriously sunny and calm morning, and the train engine wasn’t running so there was no air-conditioning (or openable windows). The train left on time and once again provided a great show travelling through the beautiful countryside.

It had been a great break. I hadn’t suffered from any fitness problems – something I’d been unsure about beforehand as I’ve never done moderately prolonged walking for four days in a row, and while the weather hadn’t been brilliant it could have been much worse and didn’t spoil things. The length was about right for me, I think – both in terms of miles per day (after the first day, which was too short) and number of days, though perhaps that might be different on another walk. The journey home went smoothly, and I browsed through the guidebook, wondering which bit of the SWCP to do next. 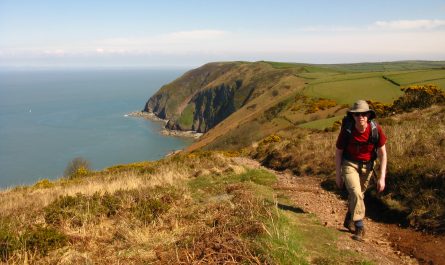