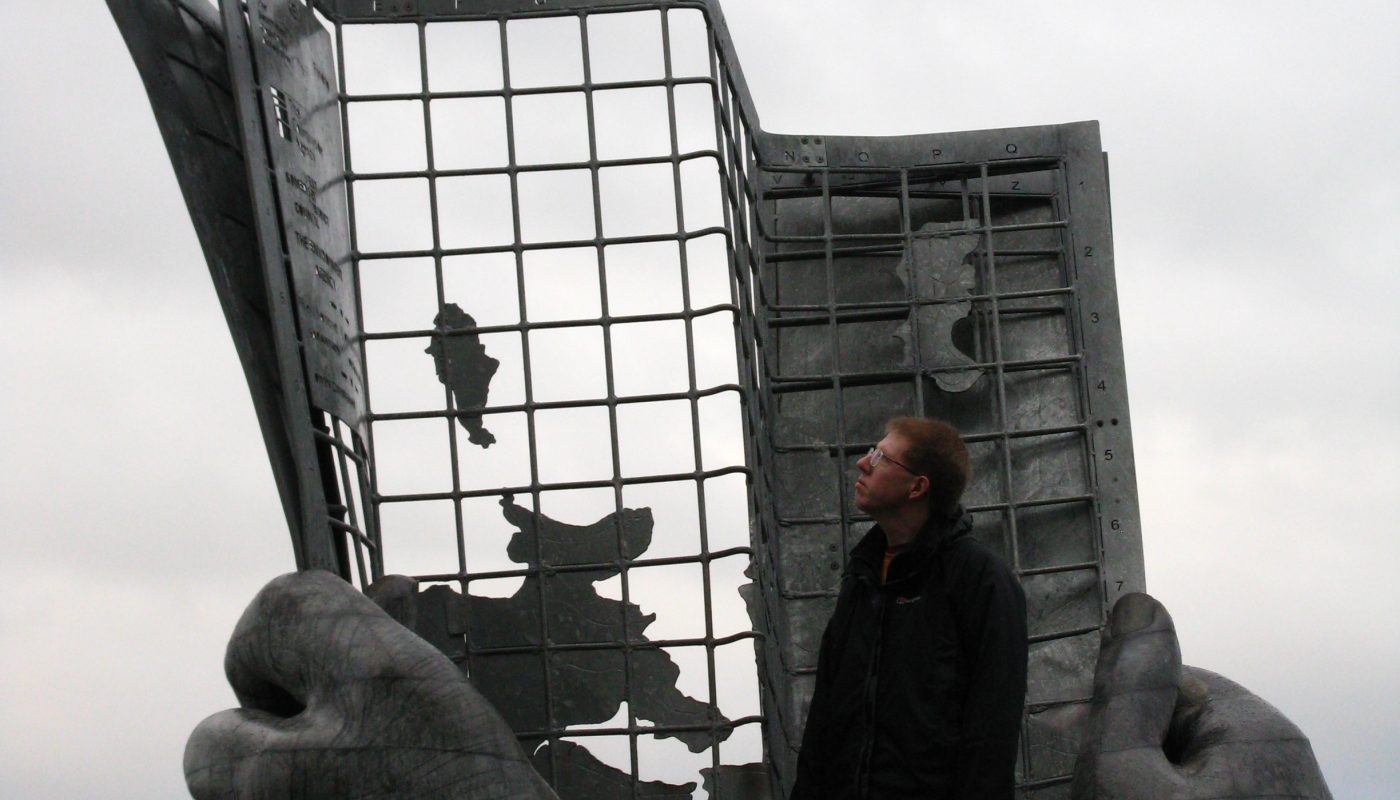 In which: The walk starts with an early morning sculpture ● the rain begins ● the way is lost and found again ● a diversion is made ● a shingle beach and salt marsh are explored ● a dog attacks me

The day dawned bright, but then heavy cloud came in bringing some rain. I went out before seven o’clock and walked back to the Sculpture (for the third time, after twice yesterday), this time making the start of the walk along the South West Coast Path official with a photograph with me by the sculpture. The walk back to the Old Ship Aground put several hundred metres of the over one million metres of the path under my belt, and with that safely accomplished, I returned to lie down for a while as breakfast wasn’t until 8.30.

Breakfast was, like the room, okay but a bit nondescript – all the cereals were what I would call children’s cereals, the sausages were very cheap, and the orange juice rapidly ran out. It was mildly entertaining listening to a French family behind me trying to grapple with an English breakfast.

Per instructions I left my suitcase in the hallway, with the owner/manager promising to call a taxi in about half an hour to take it to Porlock. Outside, it was raining. I continued my way along the Coast Path from my promising 300 metre start earlier on, and gradually gained height, first along a tarmac path and then suddenly on an earthen path in woodland. Just before Greenaleigh Farm, the route turned sharp left and I found myself heading back towards Minehead. My map showed this fairly mature woodland as open country, and at the top of the south-east “zag”, I zigged north-west, despite the sudden absence of any signs. As these had been thick on the ground up till past Greenaleigh Farm, I thought that I must have missed one, and that the Coast Path had been re-routed. I continued through the rain, climbing into the clouds, on the route marked on my map, and as I neared a car park on top of North Hill almost a mile later, I found a sign confirming that I had been on the right route.

I was now on moorland among gorse and heather, definitely on the edge of Exmoor, but trending a goodish way from the sea. The weather started to clear, and after more gradual ascent I made a small diversion to the top of Selworthy Beacon, a Marilyn.

From there it was a gradual descent along Bossington Hill, then a steep and initially very slippery descent down the small valley of Hurlestone Combe, bringing at its base a clear view of Porlock Bay and the shingle bank of Bossington Beach.

The path took me through the lovely village of Bossington, then along the re-routed Coast Path, since the old route along the shingle bank is now impassable at high tide and potentially dangerous at low tide.

I tried to follow a public footpath to visit the beach, but was turned back by deep water, so decided to continue on to Porlock. I inspected several eateries, and in the end selected The Castle, a hotel-cum-pub. I had to wait some time at the bar, by which time a couple had seated themselves at my table, despite my large rucksack lying across two seats and my newspaper on the table. When it was eventually my turn, the barman told me to go to the restaurant side, but I pointed out that the restaurant side had a notice telling customers to go to the bar for assistance. When he’d checked this out for himself, he reluctantly took my order, told me that they didn’t have what I’d asked for, and took an alternative order.

I pointedly moved my bag and newspaper from the table I thought I had bagged (no comment emerging from the couple there) and found myself what I decided was a rather better table anyway. I lingered an hour or so over lunch, getting a second drink, then walked along the Myrtle Cottage, a 16th century thatched building that was to be my home for the night. I was met by a pleasant lady who showed me to my room, which required ducking several times to get under low ceilings. The room suffered, as do so many, from lack of space to lay out a suitcase, but the bathroom was a fair size, so I used that.

At the cottage I rested for an hour or so, then went out for a walk back to the beach. I walked to the west, to the breach, past a very alarmist notice about the hazards ahead, to find that crossing the breach would involve wet feet but at this state of the tide meant crossing a two-metre wide river at most perhaps ten centimetres deep. Hardly hazardous, provided the tide is right.

I walked back to the east to an old lime kiln, then returned to the inland Coast Path, which I then followed back towards Porlock. As I moved from one field into another, I heard a woman with two dogs calling one of them which was bounding towards me barking. I ignored the dog and it first touched me from behind, which I ignored, then it bit me, tearing my trousers too. I was very cross and swore at the woman. She offered a very half-hearted apology. With hindsight I should have pursued her, or at least taken a photograph of her and/or the dog, but I was so shocked and cross I didn’t think of it. I returned to Porlock, fuming at the woman, the dog, and particularly my new trousers, now with hole. They can be repaired, but I liked that pair of trousers. 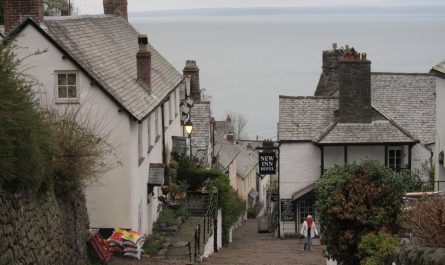 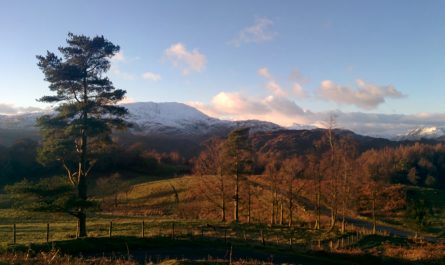 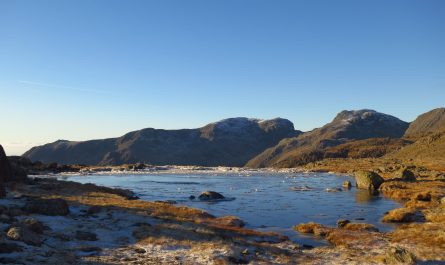